The 25th November 2020 was dedicated to the main current hot topic for the sterile pharma industry: process of consultation about the EU GMP Annex 1 (Manufacture of Sterile Products).

A second draft for consultation was issued by EMA in February 2020. Comments from industry bodies and identified associations were due for May 2020 and then extended to the 20th July 2020 due to the impact of Covid19 pandemic.

As part of the A3P International Congress 2020, a round table/panel discussion was held involving

Finally, we had the pleasure to host 220+ representatives and 13 different nationalities from industry and suppliers during the session on Annex1, which reflects on the importance of this future major shift in the regulation and on its impact on industry.

1. History of the A3P Working Group of Interest for Annex 1

During the second consultation, 17 experts worked in 3 sub-groups. They provided 112 final comments (53 comments in scope of the consultation and 59 other significant comments). On the 16th July 2020, the consolidated comments of A3P Annex1 WGI were submitted to EMA. 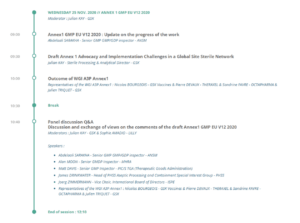 An inter-association group, made up of representatives from A3P, AnimalhealthEurope, AESGP, ECA, EFPIA, EIPG, EQPA, ISPE, Medicines for Europe, PDA, PHSS, and Vaccines Europe, was created during the consultation period for the Annex 1 draft (version 12) to discuss the proposed V12 draft of Annex 1. Several important convergent points were identified by the group during the group’s discussions. On the 11th July 2020, the consolidated comments of the inter-association group were submitted to EMA.

Mr Sarakha emphasized that the purpose of his presentation was more an overview of the editorial process of the current draft rather than a feedback on comments from the second public consultation.

The draft of Annex1 is the result of an evolution of the sterile products manufacturing environment (becoming more global, using specialized manufacturing units, linked with the increased global demand of sterile drugs), which required a global approach to issue this new guidance.

The comments from the second consultation were provided by 52 organizations and individuals.

With regards to the Contamination Control Strategy (CSS), Mr Sarakha mentioned that excipients and packaging material are definitively also part of the scope of the elements to include into the CCS. It is really the overall supply chain from the supplier of APIs, excipients, primary product components, consumables, Single Use Systems (SUS), etc, … until the final packaging of the drug products that needs to be assessed in term of risks of contamination. The CCS is not a new requirement since it is already defined as per the EU GMP Annex 2 (biologic products) and the cross-contamination control strategy (multiple products manufactured in the same facility – EU GMP Vol4. Part1, Chap.3&5). CCS doesn’t require to set a new approach however requires a deep review of the existing documents.

The novelty is that industry is asked to document a holistic & transversal assessment of the contamination control metrics showing that the controls in place are performant. Industry needs to understand the interactions between all the measures in place across the site. It’s up to the pharma company to define the template of the CCS, which could be either a standalone document or a summarizing table referencing all key strategies.

The ISO 14644 series of standards and the Annex 1 don’t require to be compared however have to be considered as complementary documents. On the one hand, the Annex 1 lists the requirements used as a basis by regulators and on the other hand, the ISO standards define a set of methods for classification however doesn’t indicate which method should be used. It is the sites responsibility to justify the methods used.

Finally, Mr Sarakha emphasized that performing a room classification is not enough by itself to achieve a full qualification.

A key focus of the new revision of Annex 1 is put on the design phase as a key mean to prevent from contaminations, which should always be our first objective especially while revamping an area or in case of a new project.

Barrier technologies are given as a reference of good practices across industry.

Mr Sarakha insisted on the importance of the training of operators involved in the cleaning process, especially when parts were not designed to be dismantled for cleaning (out of place) before the decontamination of the isolators.

He also presented the expected 3 validation phases approach for the disinfection of classified areas (different expectation at the supplier level, in vitro testing, in situ).

The demonstration of the sterility of disinfectants used in Grade A and B environments could be done based on the supplier CoA.

Mr Sarakha emphasized the particular “fragility” of the SUS systems that requires a 100 % verification of integrity at all adequate steps of the supply chain. He insisted on the importance of the training of operators in charge of the aseptic connectors and put a special focus on the qualification of our SUS suppliers including the sterilization:

The Annex 1 provides with an example of exception in relation with small volume products, i.e. radiopharmaceutical products by their small volume and by nature for which no PUPSIT is feasible. However, any case where PUPSIT couldn’t be implemented should be risk assessed, justified and a mitigation supported by a science sound justification should be developed, any time.

Consideration should be put on the filter lifecycle (from manufacturing to sterilization to final use): increase the control of manufacturing and supply chain of the filters (from the supplier) understand/knowledge of criticality and specificities of the products during filtration. Which impact/challenge could it raise to the filters/filtration process?

More and more initiatives tent to provide key technical elements to include into such risk assessment. The BioPhorum & PDA work is a good example.

Again, new projects should always include a design phase to overcome any risk to ensure that PUPSIT is implemented. Product specificities and critical process parameters knowledge are key to ensure a safe sterile filtration and a safe & reliable integrity testing.

An example of poor response from a recent inspection was given “no PUPSIT is feasible due to the filter location in grade A”. In this case, since the process was totally new and recent, regulators considered that the design hadn’t really facilitate the implementation of PUPSIT and therefore the response was found as not acceptable in this context.

3. Panel discussion and Q/A session on the comments of the draft Annex1 GMP EU V12 2020

Process of revision of Annex1: Timeline and next steps

Mr Sarakha explained that 2000 valuable comments from the second consultation have to be processed and assessed by Inspectors Working Group (IWG) before issuing a comprehensive document. Will it be finalized in Q1 2021? This is still an open question as this process will take some time.

After Annex 1 being public, Mr Sarakha brought back that there is usually 6 months before Annex1 is enforced. For some specific points needing time to implement (i.e.: “Freezedrying “), there might be extended time to allow the industry to fulfill these new requirements.

Based on the assumption from Mr Sarakha, no other public consultation is expected today.

The goal is to have Annex1 being a comprehensive document and avoiding discussion on the interpretation. In case of clarification are needed, Mr Sarakha and Mr Davis talked about the possibility of edition of some additional technical guidance for specific points or a Q/A document on how to interpret some points.

CCS (Contamination Control Strategy): how to define a best class strategy of implementation? Could industry expect a guidance on CCS from regulators?

Mr Moon insisted that they will not recommend a model due to the extreme variety of products, processes and facility designs. For existing facilities, there should be already a “CCS” in place even if this is not named “CCS” and if the elements are not put together in a coherent and structured process (historically more in a silo approach and not necessarily looking at the interactions). They will accept any model such as an umbrella document with a list of key references. They don’t expect that we re-write “systems that are already functioning” but they expect that we are able to show that we make “a regular review process and understand all interactions”. Mr Sarakha highlighted that the key point is also to have “a living document”.

Mr Drinkwater provided some initial information on the co-work between the A3P and the PHSS that has started on a guidance for the creation of a CCS. The document is under development and will include case studies to provide practical guidance (this initiative is supported by MHRA and CCS guidance will be reviewed by regulators). The timing is an approval in June 2021.

Mr Zimmermann representing the ISPE, expressed that at Vetter they have already the CCS in place since May 2020: they have created on overarching document that will be updated regularly based on trends, change controls, observations, etc…

Mr Davis said that they got multiple “excellent feedbacks” for that topic during the last consultation process and they agree that this section needs clarification. Many discussions are on-going but there is no (not yet) consensus among the participants of the IWG for that point. There is a possibility that they will recommend the use of the “M descriptor” for macroparticles (part ≥ 5µm) provided in the ISO 14644 norm for Grade A and B at rest. The use of particles ≥ 1 µm was “just a recommendation”: based on ISO 14644, only one particle size must be used for classification purposes with the suggestion of including another particle size.

Knowing that basics requirements are Annex1 and related standards, any alternative approach might be used based on scientific justification and risk management. He said that there will be a PIC’s Academy for that point to ensure consistent interpretation among the inspectors.

M. Davis said that other requalification frequencies and testing might be established based on QRM, sound science and process/environment knowledge including enough historical data showing great performance (high level of control and multiple monitoring systems in place). Systematic microbiological requalification might not be needed – again – if based on risk assessment and on good understanding of drifts, changes in the level of production activity, trends, modifications… and may be expected in specific cases such as significant maintenance, sterility test or APS failures.

“Fragility” of VHP and decontamination of indirect contact parts by VHP in isolators:

For new projects, the possibility to remove parts and to clean and steam sterilize them must be ensured. Existing lines with non-removable parts should be investigated as part of the continuous improvement to enable higher sterility assurance level for sterile products. He highlighted that we cannot simulate via APS poor practices regarding isolator decontamination/VHP cycle and we cannot demonstrate adequate aseptic process (linked to the limitation of the monitoring systems).

PUPSIT (Pre-Use Post Sterilization Integrity Testing): what do a good risk assessment and set of supportive data look like?

As per Mr Sarakha’s presentation, Annex 1:

The next steps are:

Finally, the representative inspectors recognized that the A3P conference was a fantastic opportunity of interactions for regulators and industry, and a valuable forum to share their views. 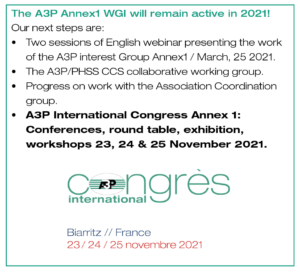 Isabelle received her Doctorate in Pharmacy and Master’s Degree in Industrial Microbiology from the University Louis Pasteur, Strasbourg in 1994. Prior to Lilly, she worked as an aseptic practices trainer at Rhone Poulenc Rorer near to Paris. In 1995, Isabelle joined the Quality Department at Lilly Fegersheim where she occupied several roles including Environmental Monitoring Team Leader, Sterility Assurance Specialist, Project Leader, Quality Lead for a Global Worldwide Cartridge lines implementation program.

Since June 2017, Isabelle works as Quality Consultant for Sterility Assurance, providing deep compliance and technical expertise during site and global assessments, projects, investigations, technical audits, regulatory inspections and new requirements. Isabelle is also active in several technical and scientific industries associations such as A3P, PHSS, PDA, EFPIA, LEEM (with among other topics, special interest on the new revision of the EU GMP Annex 1).